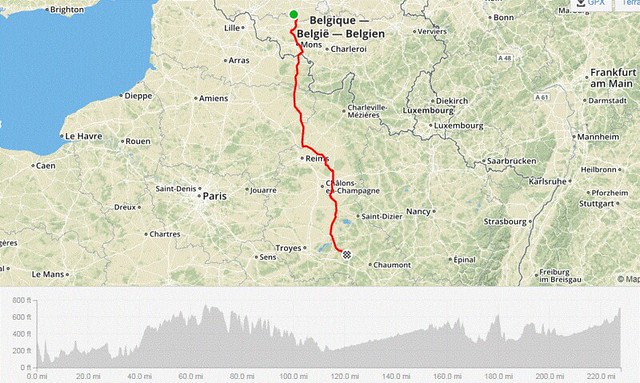 I’m sleeping fully dressed in cycling gear on my back on a hard stage, in a hall full of other expectant riders and laden bikes  in Belgium. I’m a fussy sleeper how did this suddenly become second nature….Welcome to The Transcontinental race 2015.
Having taken a nice 100 mile warm up ride from the Ferry of Dunkirk to the start Hostel in Geraardsbergen with newly friended 67 – Paul Buckley, it was strange to spend all Friday trying to waste time before the midnight start. The nice hostel had kicked us out at 10am, this quick hours kip was not ideal preparation for a 14 plus day race. The previous night in Dover, the 6am ferry (take the seat package for free food and coffee) and riding the Kemmelberg had been fun.

Thursday evening we wandered out to the local lake swimmimg pool café with TCR legend Mikko (4 – Mikko Makipaa), cheery Matt and Aussie Queensland mtb guide Rian Cope #41. The owl riding on a bikes handlebars just blew our minds…yes really! 86 – Doug Bridgens joined us late on his bike, little was I to know how we would meet up later in this crazy race.

About 11pm I wind my way up to the top of the Kapel Muur, our race was to began at the chapel at the top made so famous by the Ronde Van Vlaanderen spring classic. Race cunning leads me to go up from the back to appear at the top at the head of the masses, 200 riders are spread out for some distance down that cobbled climb. As midnight approaches, the large crowd, flaming torches, a town crier and speech from the local Mayor add to the atmosphere. I chat with friend 2 – Josh Ibbett and made the acquaintance of 75 – James Hayden whose blog I had been following, I fancied him for the race.

Then GO! the first swoop is a cobbled descent, I’ve unclipped my Garmin Virb video camera from the bars to catch some start atmosphere, it obviously wasn’t clipped back in properly, as it bounced off down the fast cobbled section. Arghh! No way was I going to jam the breaks on and cause an international pile up incident, that’s gone then. It was fun doing the first lap just behind the leaders and the pace car, then we climbed the Muur back to the crowds. Back at the top it was down to your own route, it was interesting to watch riders stop, and go both directions at the top, we were on our own now.

Those first few hours in mild temperatures on Belgium roads were all consuming, many blinking red lights in the distance, many different routes. I can only think my start position and route were good because I was passed by over 20 riders in those hours. Through the towns of Lens and Mons, I cruised through with a good plan, it was rather annoying to see one rider riding round in circles waiting for someone to latch onto. He blatantly used me and other riders for his navigation, no spirit of the event there.

Top female rider 6 – Juliana Buhring passed by with a chaperone laying down power, later on I passed a stopped 7 – Emily Chappell, who then proceeded to sprint out of the saddle several times on passing me. It’s with no hindsight that I thought I will not be seeing them for long in this race. This rider dog fight went on until the morning light, I’d pass riders while stopped and they would blast past me later on…..me I passed nobody while they were moving.

Joining many other riders on the wide main N2 into France, the headwinds brewed up, the rains came as most headed to Reims. Too early to get cold and wet, so I stripped off my windproof and donned waterproofs from my rear bag, being a muppet I got easily distracted checking out other riders passing and left my seat bag undone. 10 miles later in a blinding downpour a stopped rider told me of my error. My heart sank as I gingerly peered in the bag, luckily my Bivy and down jacket were stuffed in tight, Goretex shorts, rubber boots and windproof and other small bits were long gone. Despite the cost of the shorts there was no way I was going back, the mental hit would have floored me just then. Seems I was going through a natural selection of kit process, I was now a bit lighter, in weight and to the tune of about £250 worth of kit.

This episode hammered home one of my golden rules, every time I pedal away from a stop there’s a prestart ritual checking for phone, cash and other stuff that might have been accessed before moving off; it avoids expensive and time consuming errors, lesson hammered home.

First light came after nearly 7 hours of non stop riding the lights of the first open Boulangerie were spotted in Montcornet. Team Shergie (189b – Jonathan Shergold) and Emilly were there just fuelling up, the pristine shop had to suffer the lakes dripping from our feet and bodies. 4 big pastries and a brief 10 mins later it was time to leave. It was also the start of a common theme in the coming days, arriving after other riders and leaving before them.

9am approaching my turnoff from the main Reims route for a long swooping bypass of metropolis, it was time for Coffee and a back rest. Night riding focuses the mind and temptations to stop are limited, but a morning hot coffee and a chair with a back is essential part of my plan of attack. Once sat down the realization  of how cold and wet my body was, but worst my Apidura grab bag was swimming in water. Both my phones and cash were soaking and demanded immediate drying with swathes of serviettes to rescue. No other bag I own leaks this bad, not even a hint of seam taping, NOT recommended sorry.

Luckily the rest of the days riding proved uneventful, it dried up, but the headwinds continued on long open plains on my quiet route. A few other riders spotted again who I’d only pass while stopped, too early to strike up relationships with them, though a guy with luminous yellow knees and arms kept appearing, then Doug surfaced again. While stocking up at a supermarket to allow the evenings push on, Doug Bridgens arrived as I left, obviously a rider of similar pace to me.

Come 7pm and still light I was happy with my days mileage, and knowing I hadn’t slept for over 36 hours the decision was made to stop before causing any sleep debt. On a fast open section of road a field workers stone hut appeared, despite the early hour nobody would stop here. A bit of floor sweeping and a perfect squat for a TCR hobo.

So began my new nightly procedure: A bag of pistachios, and Apple for recovery amongst any other food I fancied, then set the alarm for 4 hours as soon as my head hit the stuff sac pillow.

Lessons learned Today: If that’s all Northern France can throw at me, the south will be a dream. Check your kit packing before approaching storms it will get wet.