Sitting here watching the rain pour down outside, my thoughts turn to Steve Abraham ploughing through that, and of seeing Kurt in a video dressed up in full waterproofs for a full days riding yesterday (day 291). 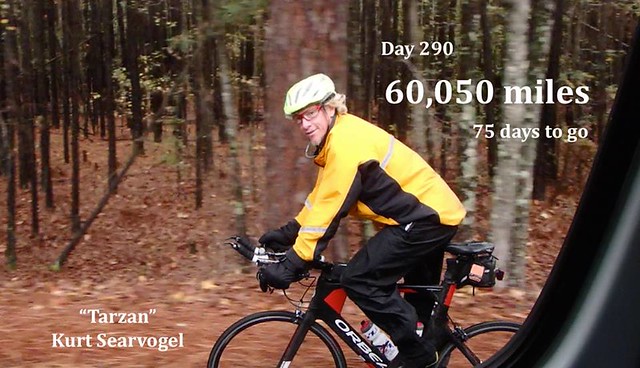 Absolutely amazing that he has now passed 60K miles, It hasn’t been without many testing times and understandably the strain is showing.  Alicia, now wife, (they just interrupted the ride one day to get married) described it perfectly as “clinging to the side of the mountain” A few weeks ago now with under 100 days to go. He was feeling the strain, had a cardio episode, and had to visit A&E. Then had a rare day off, still did 50 miles, but the slightest off day puts a big dent in the average as shown by Jo’s ace graphs. GIcentre 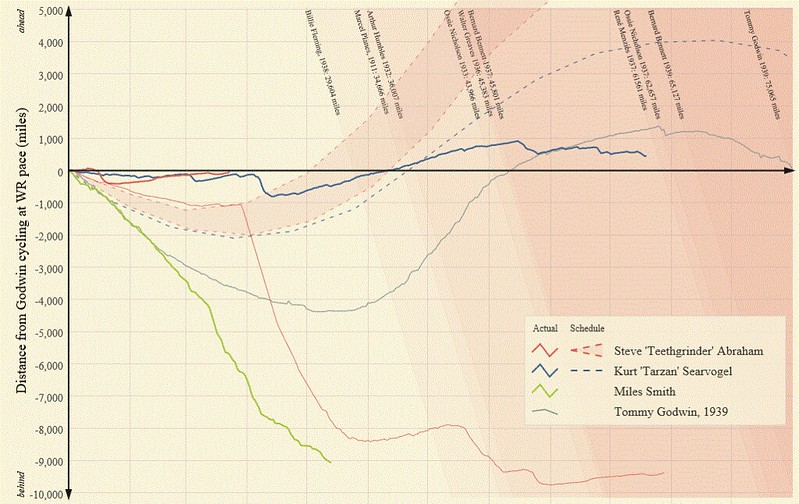 Kurt now on a donated Orbea bike (funny how sponsors appear as the record looks possible) is the bright blue line. You can see how he had a great summer and built up a buffer as he rises above the 205 a day average line mid graph. But then a combination of bike problems, health problems for Alicia and bad storms really hit into that buffer. Its also mentally tough keeping going at the slightest setback when you have that buffer, and we all know the feeling of feeling jaded as the home stretch approaches.

At present he is 470 miles above that world record line (don’t forget he has 9 days in January 2016 to do too)but interestingly below the astonishing pace of Tommy Godwin for the same time of year. I’ve grown to like Kurt he has done this in a really engaging way with his constant updates and videos, and its noticeable that Steve has struggled in this respect even with a team around him.

Godwins average suffered heavily as he passed through October 26th 1939 which was the day that he took Ossie Nicholson’s previous world record having accumulated 62,746 miles. The toil of the next two winter months will always hit the averages you’d imagine.

Steve, well he has settled into his Mark 2 attempt, but his tactics have changed dramatically. The bright red line on the graphs left is his current “reset” challenge but he has also ridden over 52,000 miles on his original 2015 record attempt (the lighter red line)

Gone are the hosts in different parts of the country, his original team has fallen into disarray and he is trying to provide some glimpse into his world by adding daily comments to his Strava updates.
He openly admitted that the lack of rest was killing his recovery so has adopted a later start time tactic now, less stops, trying to save every minute.
This is apparent in his Mk2 start at above WR pace then rapid decline.  A routine of sticking to Fens out and back rides has now developed at a good average of 200+ per day, and he has clawed it back to closer to the line. BUT where are the long buffer summer rides, can this approx. 210 per day pace be good enough, a harsh winter could create a tough hill to climb.

Personally what Steve is doing is astonishing in its own right, and I wish him well, but he is not at the Elite level athlete that Kurt or indeed Tommy G are;
Distance = Speed x Time. Steve just doesn’t have the speed to give him more time to recover or the epic mileages of TG. You can see on the Strava graphs that Kurt does the mileage in under 80 hrs a week where Steve is at a metronomic 95 hrs/wk. 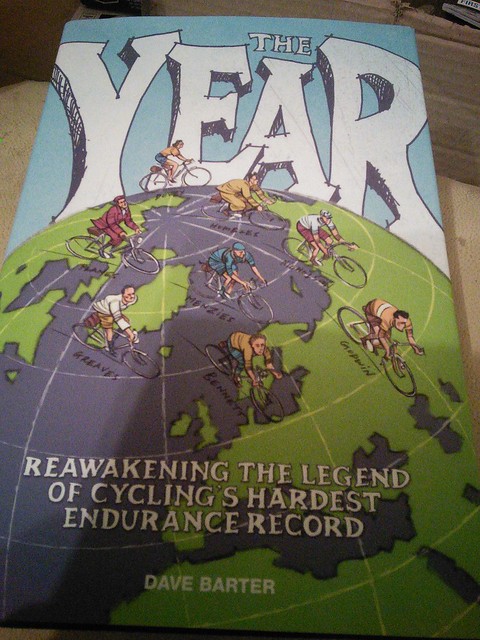 Hot off the presses is the definitive history of the one year TT record and its origins. BUY or click picture. It’s a brilliantly written and inspiring read from fellow cycling nutter Dave, and I can’t recommend it enough. It has sparked my interest in the year long Century challenge that Cycling magazine ran in 1911; how cool would that be if it was resurrected. Strava could cope with that easily and a truly global contest could ensue. Usefull Links: