After a restless few hours thanks to my bunk mates I gave up and was on the road by 4am. John had stopped earlier and had passed as I woke. I had little water and needed some stock before the long climb. Still dark I soon find a hose reel at a church in Vida along with a few sleeping racers on porches, I chat to one packing up but recongnition dosent come. It’s cold and carrying on next is McKenzie bridge, I hope the shop is open. Talking to a mountainbiker getting kitted up outside it’s going to be an hour, I’d kill for a hot coffee but have to make do with some relief from a welcome outside toilet for now.

Little did I know but I was in the wheel tracks of Anton Linburg  for quite some time here as we progressed onto the closed section of the climb. The road was clear of traffic but there were a couple of cyclists out hammering the climb, I made a note to watch out for them coming back down on the blind corners.

Make no mistake this is a long steep climb with a loaded bike. At a pull in on the first false plateau  area I read up on the Scott road area, an original tougher route over the top. Soaking in the majesty of this amazing scene, it’s not very often in June you get to be part of a winter wonderland in lava fields beneath a distant volcano. Eating a big portion of trail mix in utter silence, looking once again at this picture makes me smile. Mckenzie Pass info 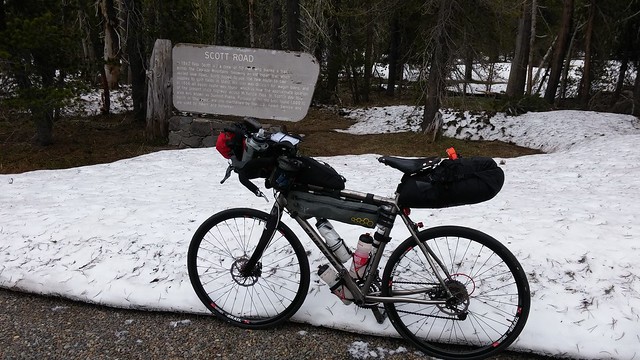 The Tripster wasn’t dropping into the bale out granny ring easily, but it felt good climbing in the middle ring, slow cadence and steady. All the talk of snow pre-race I expected more and after a few false flats it finally appeared in 6ft slabs at the side of the road, fantastic. why on earth would you want to climb over here in the dark? 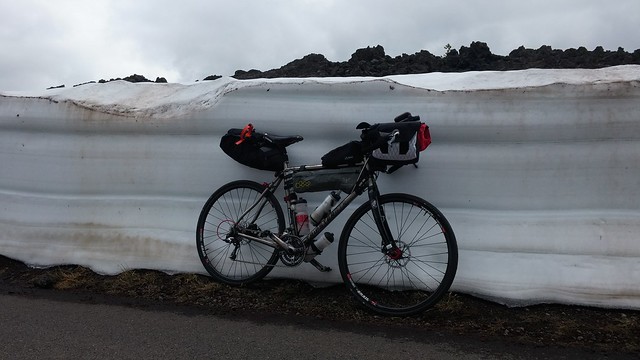 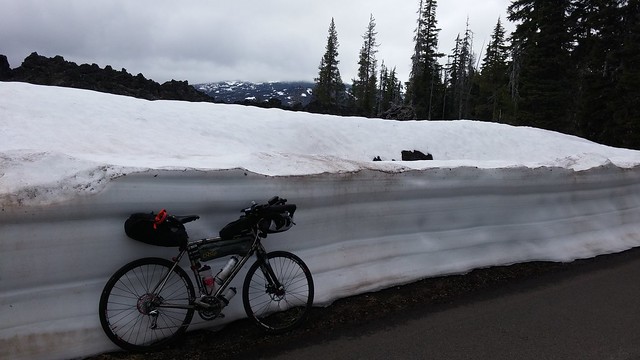 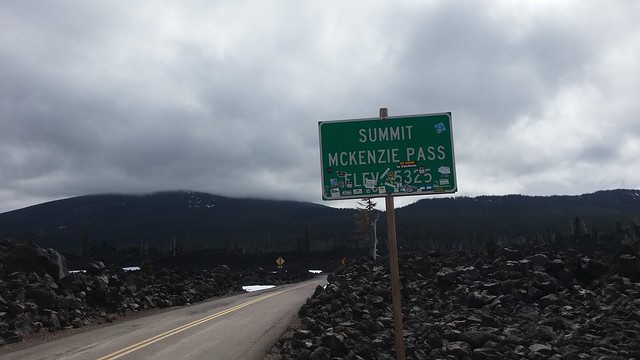 At the 5300 ft summit I found a sparse feed station for the gravel race we had heard of setting up at the top, they were climbing from the other side. They were just young kids, and had only started setting up, jaws dropped when I mentioned what I was doing. I was glad of there offer of a few crackers and peanut butter, shame no hot drinks though this was a tough start to the day. They took my picture with the volcano. 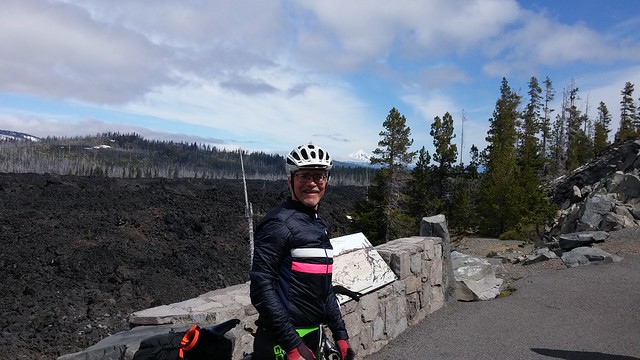 I was looking forward to the descent, and passed the lead gravel riders on their way up, they didn’t look very dirty though.  A head wind slowed progress, and it was mainly long straight sections, not as much fun as the hard climb deserved in return. The views turned from snow to acres of burnt trees, the blackened scenes of a recent forest fire was quite a contrast. I was suffering a bit now, over 7 hours without breakfast Sisters could not come quick enough. It is a big Oasis after the isolation of the pass, a big tourist trap and I looked for a diner that could give me a nice big breakfast.

Determined not to check the tracker I only now look back and find out the place had four other riders eating here at the same time, I saw no bikes the whole time. It would have been great to share breakfast time and stories with John or Anton who were here too. I desperately needed a break and to warm my core temperature back up, and had a long stop with great food. My back reminded me it had really fallen out with me after that climb so more pain killers were needed. 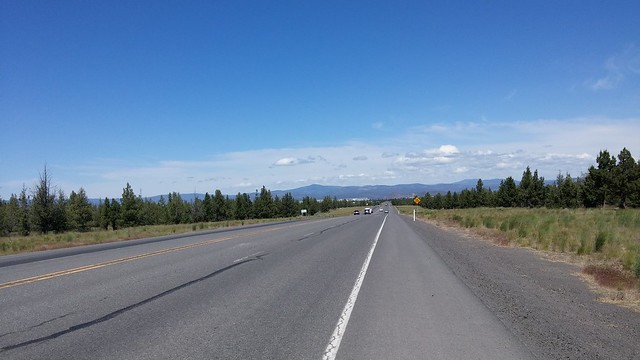 On the move again and what a change, an open prairie like section, hills in the distance, and the heat was rising along with a cruel headwind. The 126 to Prineville was hard going and hot, I didn’t realise it at the time but it was the first warning of what heading South was to bring.  I’m staggered when I see my first rider of the day an Italian, Michelangelo  I think. Quite a strange sight as he was wearing a green puffer jacket in these temperatures, other riders said he rarely took it off, must be insanely hot in Italy then. A good lesson for dot watchers, looking back at the tracker for this road it looks super busy with riders, I had no idea it all felt so isolated really early into the race, never saw another sole.

In Redmond I restocked with drink and food for the next open section I’d highlighted on my profiles, but then quickly after setting off had my first experience of dot watchers. A bike shop had chairs outside and was offering food and drink, no way could I resist it’s part of the experience and stopped for a cold one with pancakes and bacon. Another racer was there who I don’t remember, a happy bunch it was fun, they told me the Scotsman was not far ahead, cool.

Now it’s really hot, the first uncomfortable session of the race. Past the Ochoco reservoir there’s a steady climb into the Mill Creek Wilderness area, my right Achilles was starting to ache badly. This was a pain I’ve never suffered before in thousands of miles cycled, it was now causing frequent short stops and an easing of pace. Worried I started to experiment with different ankle positions thinking pointing my toes down might ease the strain, was I compensating for the back pain causing me grief. 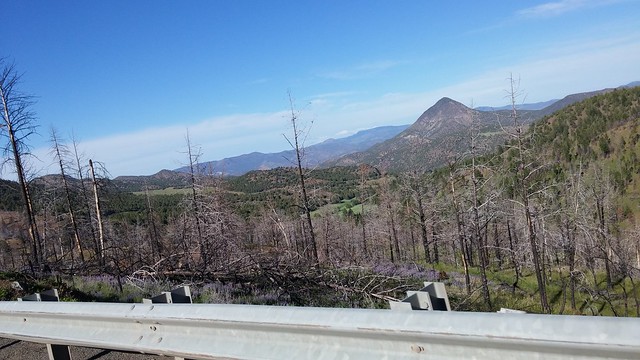 It is quite a contrast from the lush forest before and over the Mackenzie pass, the first realisation of how far you travel each day in this race. This was a long 47 mile isolated section you have to be prepared for with plenty of fluids.

Into the valleys famous for huge deposits of dinosaur fossils, it was great to reach the Spoken Hostel at Mitchell.  A pre race day 2 target at 400 miles in, this had come so much quicker than expected, even Janie Haynes hadn’t reached here at the end of her day 2 in 2016.
It was only 6PM and still stupid warm, way to early to stop, Dayville would have been an easy end to today normally. Looked like I was the first rider to quit today apart from a well laden tourist who had his own room. It was a tough choice but I knew I was in trouble and had to rest the leg and work out what had gone so wrong. Nagging doubts set in, my ankle was really swollen, emotions were on overload. this could be game over already.

The Hostel was born out of a way of funding a dying church and offered an open house for racers, it is a fantastic facility run by wonderfull people and highly recommended. Getting here in 2 days is a good target, the rest and food will pay you back well.

There was more angst, despite rows of empty bunks they had all been pre-booked by racers, plenty of floor space and sofas, but my back demanded a bed. I was beginning to learn the powerful part the phone would played in this race. I showered, rinsed some clothes and ate. Using my injury as a lever I then convinced the custodian I’d vacate the bunk if the relevant rider appeared. 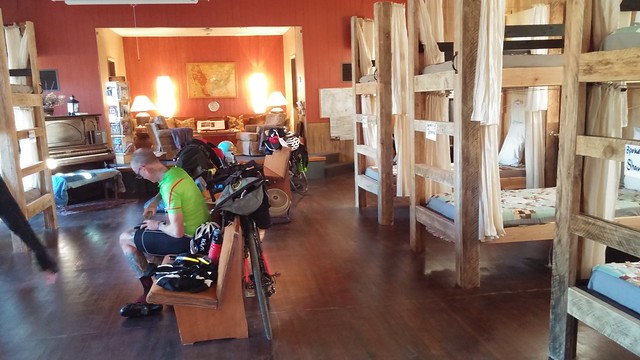 Climbing into a top bunk (would you believe it) became a one legged operation, it was an emotional few hours of stiflingly hot daylight spent updating the Whatsap voice cast, I seriously thought my race was over. I had to console myself that I passed my party line at Redmund easily today, more on that later. Lukas arrived and setup for a quick sleep on the floor, that made me feel less guilty. Despite the early hour and the stream of riders dropping in on their way through sleep came well due to the poor rest the previous night. Turns out a guy called Ralph was my bunk mate.

While I wasted time John got to Dayville with five other racers. Eight joint leaders were all in Baker city an amazing distance at the end of Day 2 definitely on record pace. My position dropped to 36th along with the other nine riders in the hostel at midnight.