Lets face it the spot tracker annual subscription is a high price to pay for the occasional week on the road. 130 Euros (and ridising fast!) could be better spent. Events hire out trackers for short periods but I have owned and used my own for some time. With no races in the plan for 2018, it’s time to check out the potential for using the smartphone for proving the location information to friends and family for extended trips.

Such a solution exists for both Android with Bubbler and iPhone with SWconnect. My experience is with Bubbler as the tracking interface feeding Spotwalla as the mapping display portal.

I have dabbled with this before over a year ago and it appears unchanged since then; using the free lite version I decided to test it as a full tracking replacement. Checking the Pro version it costs £8.99 which interestingly only has 1000 current downloads and was last updated to V2.4.01 in Sep 2016

Performance test 1 was during a 7 hour local ride out with a pub stop. The phone was running with GPS, data and Bubbler active starting with a full charge. After 5 hours I called up the map and took a screenshot. 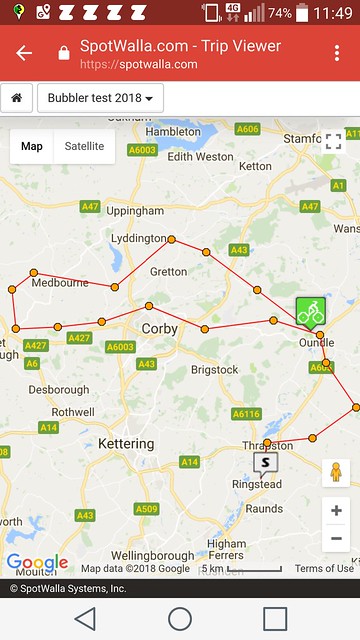 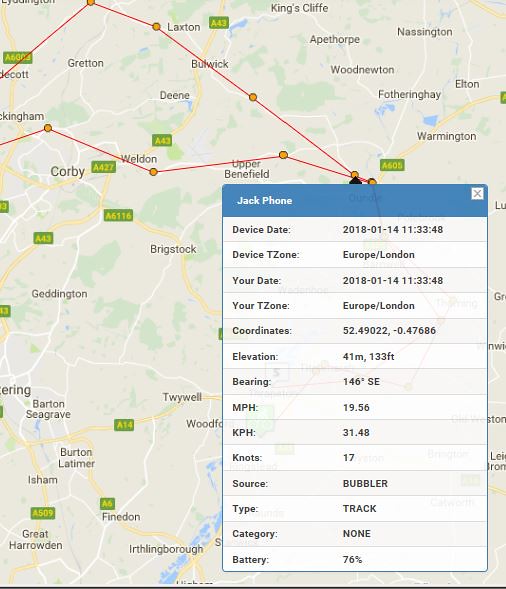 As can be seen the trackpoints appear sparse, for this period with good coverage there were 20 recorded points. The lite version states an update of “as frequent as 15 mins” and in practice that was exactly an average of 15 mins.

The green Cycling Icon shows the current position and each point is expandable to give specific information as shown. Battery life could be useful to watchers as an explanation of why your tracking has stopped as well as a good tool for these tests.

26% battery use for 5 hours is pretty good in my book especially as that was running at maximum drain. Bubbler lite will store 5 positions so you could leave data off for an hour and save some life, or just update at your own request.

Looks like purchasing the Pro version could be worth it as this will then store 1500 positions “offline” and these can then be updated whenever you choose, or in poor coverage areas by waiting for wifi access at café stops.

Initially it does look like a viable alternative to the tracker especially in the UK, and with the pro version it would not even be essential to have phone data connection. Just storing the points and then uploading them when wifi access becomes available should be more than enough.

The next test will be to try this on an all day ride to check out storing a few points and manually loading points before then purchasing the Pro version if phone battery performance can be optimised.

(scroll down for updates)

On another weekend of riding I tested using Bubbler with the phone in airplane mode for maximum battery life. One thing I noticed was that as you set off it’s essential to get a GPS signal with the two lights on green to show point recording will be healthy and hit the update now to record a start point. Untill this is done Bubbler hasn’t been started for the days session. You can then close the bubbler app window and it remains running in the background with the small bubble icon still on display in the top line. Then I switched data off/airplane mode and rode for a few hours.

After a few hours I figured the five allowed stored points would be in the memory, so reconnected and hit update now again. The screen above shows how there are actually six points waiting, the update button sends them off to the map with their original timestamps. This worked well if you remember to update regularly and if you just want to add an end of day marker it would work well for that.

This is good enough for my uses so its time to buy tHEREhe full app for a full checkout.

This summer 2018, I took a trip to Italy to take part in the Alpi4000 Audax there. I used the bubbler tracker and had no problems what so ever, battery drain or data use was never an issue. It kept friends and family informed and they used the tracker to keep in touch with my progress and send me messages. The gaps in the coverage were my choice for when I chose not to have the data on. It worked fantastically (paid version) and i could have added lots of icons for when I slept and ate if I’d have wished, I added one sleep as part of the demo. The actual Italian event is marked on the map in Red, which during use provided users with the intended route.

The trip site link if your interested is , and will remain available until I remove it. 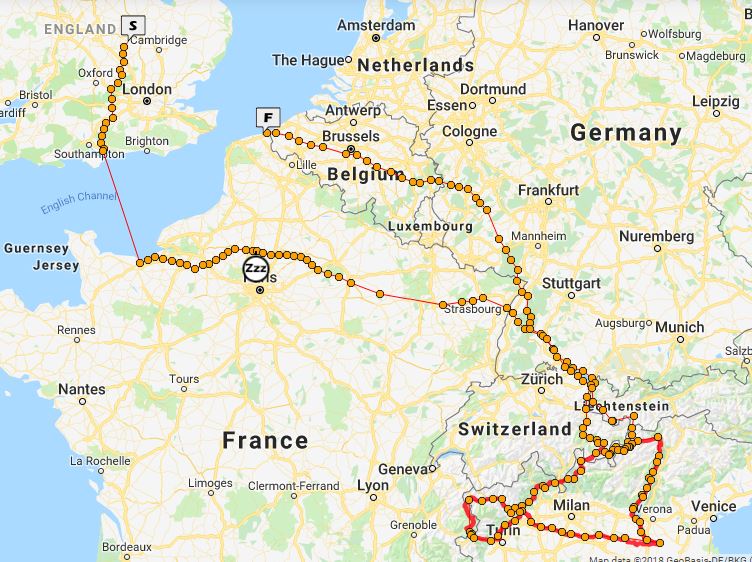