Day 4: It’s now Saturday and out of the madmen shop in daylight had allowed the bad weather to pass. The route misses any built up areas of Amsterdam and soon you are on cycle tracks through green areas.
I catch up with Bregt again and we both stare in bemusement at a narrow lock gate on the route. As we flounder to shoulder heavy bikes over two tricky sections a group of club cyclists ride by. You guessed it not long over the other side they passed us, knowing a better loop round. 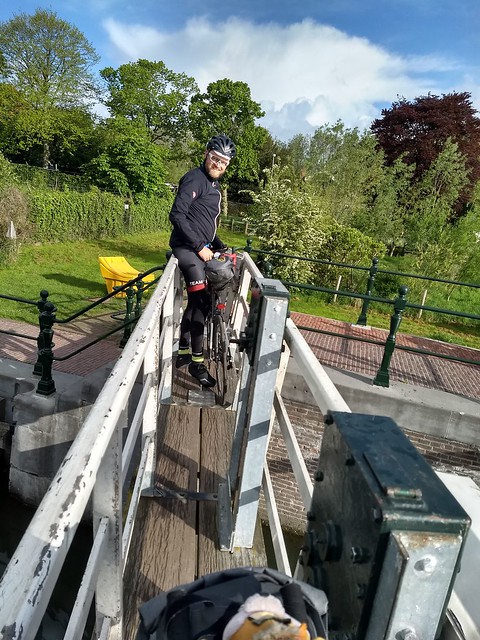 Back to riding round the lake, this section hugs the coastline on the dykes, I pass through Edam and decide rather than stop for breakfast, I hit a market stall and buy huge bags of nuts and chocolates. The sun is out and the wind direction is kinder as I’m heading North. There are sections of the route where you are on cycle tracks on top of the dykes, this offers great views but is hard going as it’s exposed. Cycle groups were passing bu on the sheltered roads behind the dyke, and it’s places like these where you are totally relying on the honesty and Integrity of your fellow racers to be true to the route and themselves. There are several information boards showing the history in pictures of the reclaiming of the land, it really is staggering to see as it is very recent history. 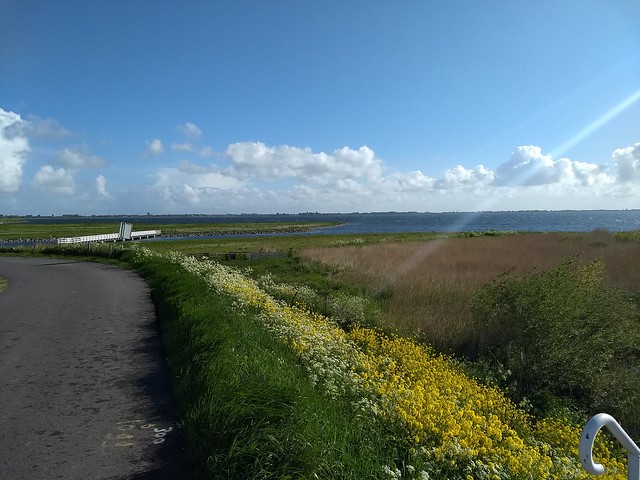 Eric, who had stopped, caught me up and it was great to see his enthusiasm as a tourist in his home land as he explained some of the process to me. Apparently the lake we went around was also considered for a huge reclaim operation after the dam was built, but proved too expensive an operation. We stopped for some time taking photos of each other at some lovely locations, no rush, no stress, brilliant.

I think it was at the most Northern most point of this section Den Helder around the big dock area, that Bract or Bas (I’m confused) caught me up. there are ferries and huge interesting working ships here but amazingly they seemed to be expecting me; look my name in lights. 😉 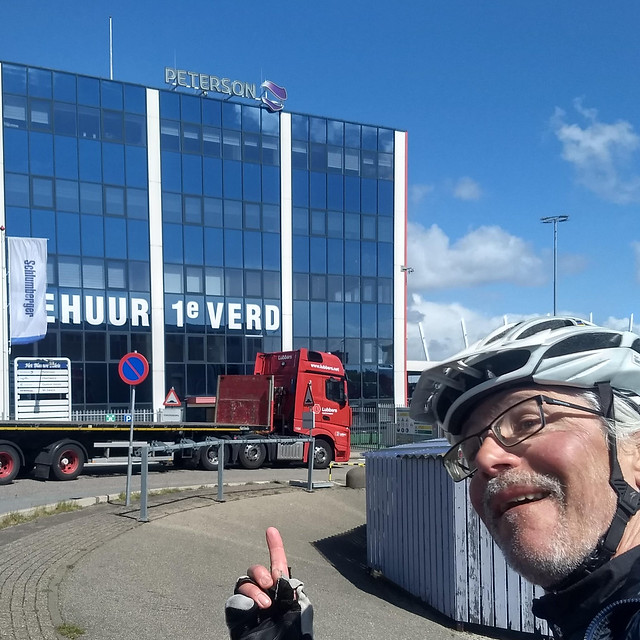 The dam/dyke after here is like a huge seaside concrete velodrome, its vast and great fun to ride along with fantastic views. This was a great to be alive moment, and with one of those strange coincidences their was a group madmen gang reunion as we heard shouts from a high up restaurant. 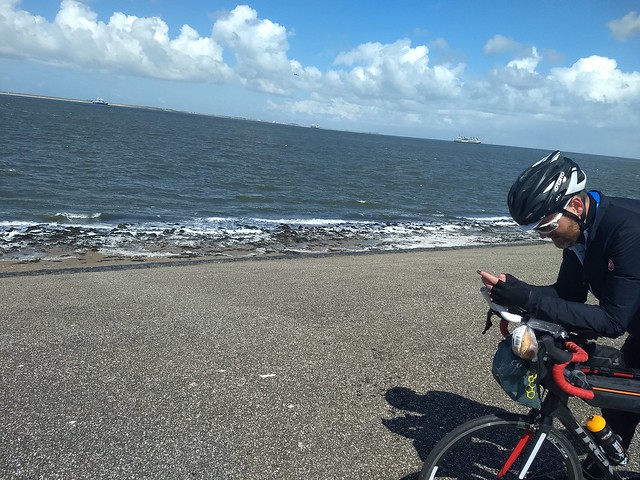 Sebastian from Germany was here too and these boys were hungry, I could not afford to eat here so after a coffee I left them to it, but it was great to carry on our ongoing comeraderie. As so often happens in these events you meet a group of similar paced riders who develop into friends.

Finally some tailwind as this section first takes you through sand lined dykes on stunning cycleways and then Into the dunes section which is brilliant twisty fun with a few lumpy bits. This section is forbidden at night for your safety, because it’s not uncommon to come across big black cows and Highland cattle wandering around. It would be utterly criminal to miss this out by doing the road diversion, it’s seriously good fun and beautiful.

The dunes are separated into two parts along this coast, along the way there was a ferry crossing which was just about to leave as I arrived, perfect and Seb was onboard. He’s a quick rider and soon disappeared again. Coming into Haarlem, a place I have cycled to before, it was once again a re-meet with a few riders and family in cars chasing them down. The route from here back to the coast at Zandvoort was blocked as it was a Liberation day rememberance event (May 5th) By chance I grouped up with the no luggage/pannier pair of ladies who had bused it over the dam, and showed them a diversion route through the forest. 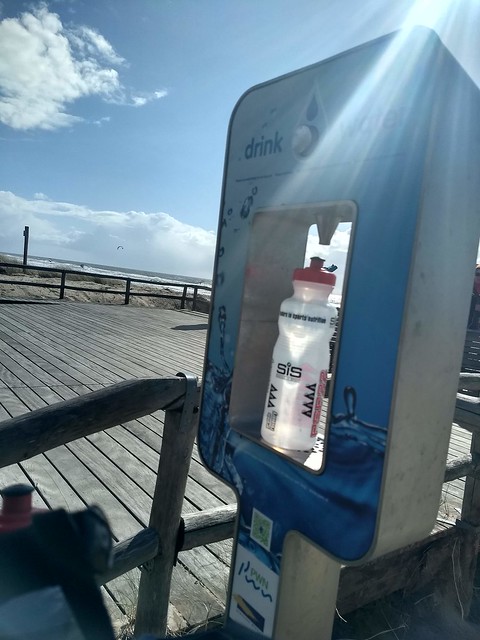 I had a few water stops marked on my Garmin, waypoints are great and i use them alot. This is your typical Dutch water station, isn’t it fantastic, come on world catch up. So I take the photo and ride off and enjoy getting back into some dune riding when uh oh, I realise i have left the bottle there, muppet! I have to retrace my tracks.

I am stopped by the tracker guys for a tracker change and Seb appears again, we ride the dunes roller coaster together, he is obviously faster on his Sonder Camino with big 650b wtb tyres but seems to want some company. We have fun dodging cow poo and big sand drifts twisting through the dunes into the dark. I am desperate for some chips and we stop at a fair where unfortunately all we can find is donuts, oh well good enough. Into Hook of Holland where the ferry docked I remarked that if yesterdays rain had not stopped I would have rolled into the terminal and cashed in my return ticket. 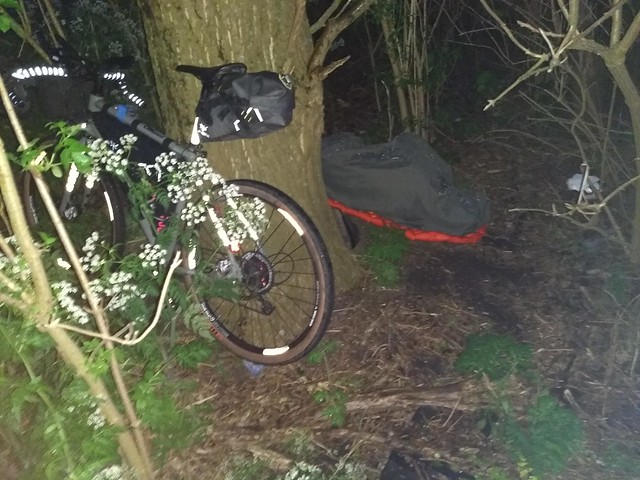 I remembered a quiet cycle track on the riverside towards Rotterdam and we soon found a dry dense patch of bushes to bivy down in a nice sheltered spot. The end of a great days riding, it seemed most of the others took to roofs over their heads in Den Haag.

RATN 2019 Continued The next day