I packed up my bivy shelter and headed out leaving Seb just stirring, I was keen to clear Rotterdam and its million traffic lights before the Dutch woke up. A perfectly placed McDonalds was open, the perfect morning breakfast and wash up stop after a bivy. Seb soon joined me as we set ourselves up for the day.

Today turned out to be slow progress, a mixed bag of heavy showers differing wind directions and sunny spells meant I never seemed to be in the right clothes in the morning. 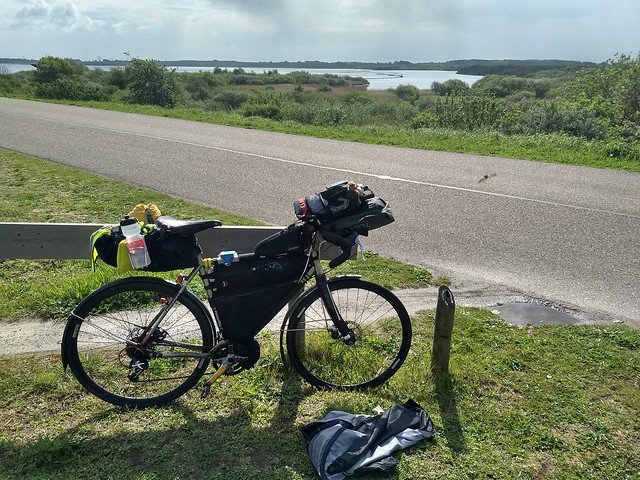 This is a peaceful low population area of Holland, like a giant waterpark of Islands. The wide open Dams and barrages connecting them make for great cycling and its quite touristy. I made a mistake of not stocking up on food in Rotterdam as I was worried about bike security while shopping, and this place only had fleece the tourist style stops.

It was a beautiful ride in the afternoon though, almost warm and a lovely area. 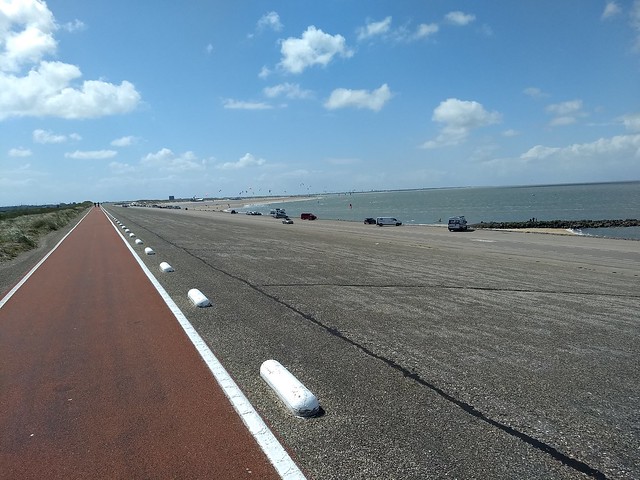 Mid day I was passed by Bract towing along a group of friends out to cheer him on for their Sunday ride. They powered off, another in these constant yo-yos with the faster riders, I hadn’t overtaken a single rider yet I keep appearing on the road in front of them. I stopped at one of the roadside stall cafes eventually when hunger took over. It reminded me why I don’t do this often, service was poor just for chips and the consolation that I could at least stock up on water for a long session was destroyed when I found out they had salt water coming out of their taps!

Leaving the Coast and heading inland skirting the Belgium border it was getting colder than ever as the night dropped in. It was a reminder of how the warmer sea can keep temperatures up, this was getting painful in the joints. As the night dragged on every item of clothing went on, three layers on the knees, one of them a cut up pair of socks. This section is dull and even the increase in bar culture with the Belgium influence didnt materialise.

A quiet gravel track following a river off route was a cue to dive into a small wood and bivy down with some cover. Despite a sleeping bag, and down jacket it was a pretty poor night for rest, stopping with a very cold core temperature you just can’t recover, I should have made a warming brew before sleeping.

The end of another 186 mile, 16 hour day, nothing if not consistent.

Getting up early I made a big mistake; for the first time ever I followed the route the wrong way, it says something for how featureless this area is that it took me 15 Km to recognise a bar I had seen the night before. That was a real low moment and cost me two hours, I had to brainwash myself to forget it or it would drag me right down. I desperately needed some comfort food but it took four hours untill I found some, meagre portions but what a relief. It reminded me just how good it is in the UK to have a full English for breakfast, how do you Europeans cope in the morning. 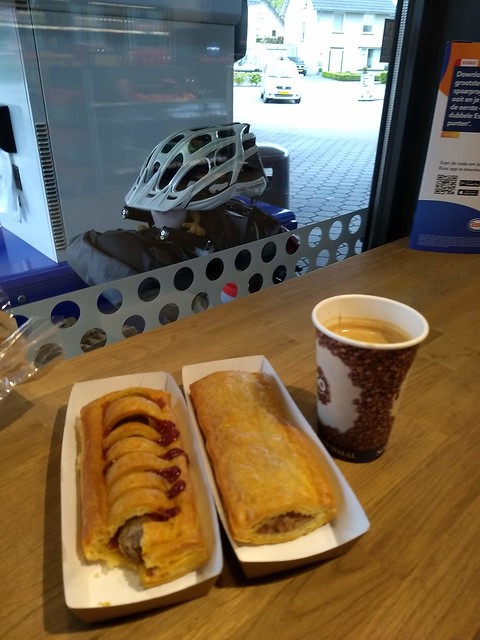 It then rained heavily, sprits were low and I don’t remember much about the trip down the Belgium border. This stunning graffiti art stopped me dead, amazing detail and technical info. 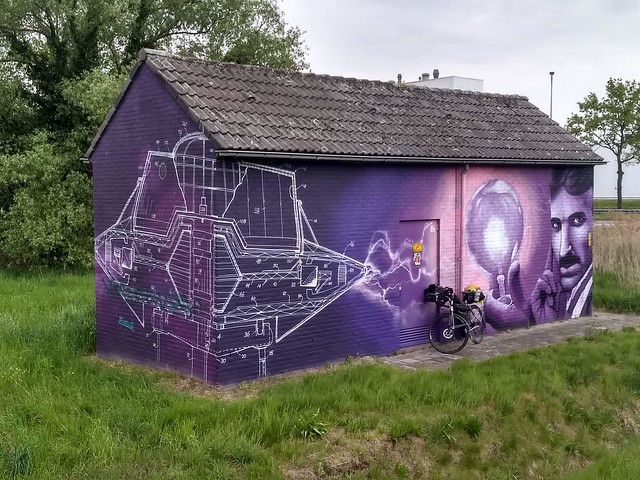 The first Supermarket was raided and my bike frame bag “The Fridge” was stuffed full and another sackfull was devoured over a Brew at a local park. I found this trip i could keep yogurts and other stuff on the bike and they remained ice cold.  A mystery French rider was the only person I saw pass, his tracker not giving his identity away. 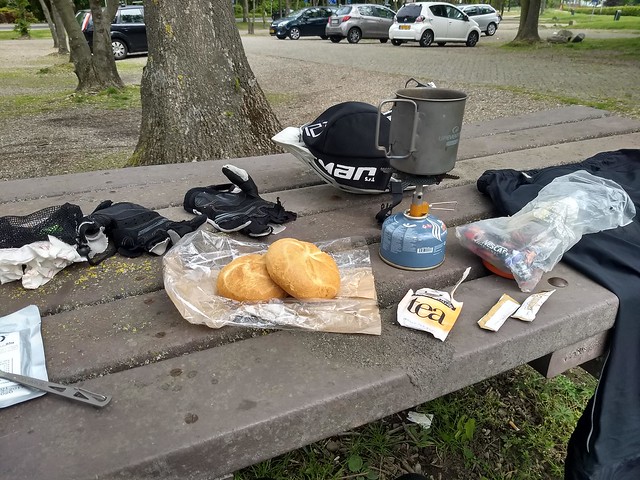 The section at the bottom of the Netherlands surely belongs to Belgium, your not fooling me that is part of your country. This bit contains a sawtooth of ever increasing summits, with some very steep sections.  Mattew Vandepol’s name on the road a reminder of his recent amazing win in the Amstel Gold race here. 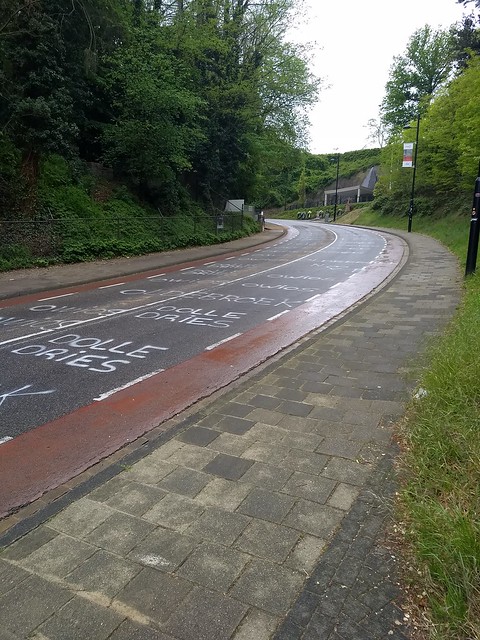 As night fell I was glad to find a fruit stall in one of the valleys and stocked up with liquid and carbs.  Now heading North skirting the German border it was the last leg of the journey, I had decided early that I had to ride through the night to try and keep warm, could I manage it.

Riding through a big city, I think it was Roermond, I got confused with the cycle tracks and a one way system, dived off a track early and headed the wrong way on a one way busy road. I jumped off and pulled my bike to the side of the road just at the moment a police car came into view. Incredible, the first one I had seen for the whole ride, how did they know! They flashed on the blue lights and one got out, I just shrugged and they seemed to understand immediately I was a confused tourist and left me alone.

I have ridden through cold nights many times before but this time was a new one on me. Usually when you stop you get cold quickly, tonight I was coping OK once stopped for a pee stop or to grab some snacks. It was bitterly cold once moving and I found I had to slow down to make sure the extra windchill didn’t cause knee pain and shivering.  This made the ride pretty boring and as dawn approached I was feeling tired enough that I knew I had to stop before my eyes started to close themselves.

The cyclepath passed a petrol station which was closed, I pulled up at a bench, set an alarm for 30 minutes and just lay down with my helmet on exposed to the elements. It was about 4 degs C, yet I didn’t care and don’t remember feeling cold. I was asleep immediately.  On waking I went round a corner to have a pee, when I returned I was greeted by an old women on a bike; in broken English she said “I bring  Blanket”

In her bike pannier was a huge blanket, it was 5am, she must have passed by and gone home for the blanket, bless her, I thanked her and left, I could have hugged her for such a generous act of kindness. Afterwards I though just how weird it would have been to wake up covered in a magic blanket that had appeared from nowhere.

It has happened to me before when I lay down for a few mins sleep, where it fools the brain into thinking it has slept enough. The legs were still stiff and cold but the mind was clear and eager to get going.  It was a slow few hours until a fellow rider pulled alongside, Aram had just left his hotel for the night, naturally he powered away with ease. Soon after I saw his bike outside a McDonalds in Nijmegen and had to join him despite just wanting to finish this ride; it just seemed wrong to pass a rider like that at this late stage.

Although in reality I was going slow, I felt like I was putting on a bit of a spurt to the finish, whizzing through the commuters in the busy college town, and blasting the Riverside tracks. It still took a further two hours untill the welcome sights of the big forest around Amerongen. Arriving back I was welcomed by Michael and Aram and in no time at all we were on the wrong side of three beers for a second breakfast, I love Australians. 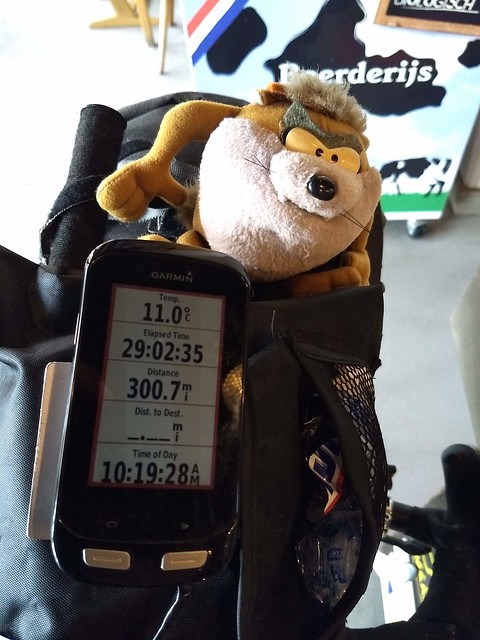 Taz and the final long ride stats. I had completed the Race Around The Netherlands in 6 Days 2 hours and 19 mins for 24th rider back, only 16 mins behind Aram so maybe I did have a final dose of speed.

Beers at the end with Aram was a cool way to finish, cheers dude. 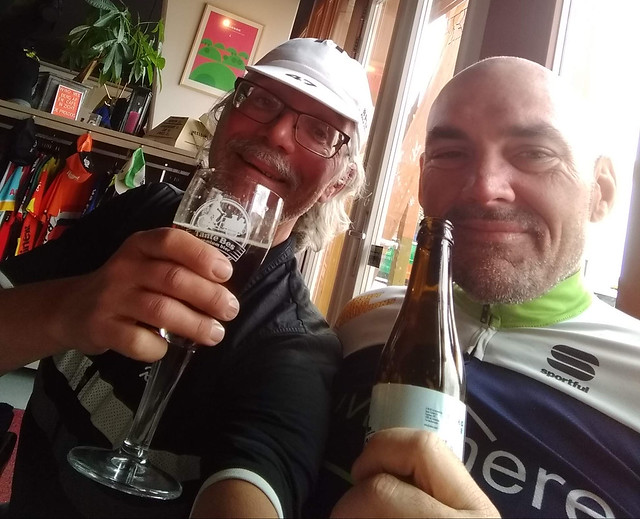 Over the course of that day the rest of the Madmen gang rolled in mainly over 8 hours behind me, mainly due to my ride through the night. Bregt Huizenga, Sebastian Bönner, Bas Scherpenisse and Erik Vennemann it was a pleasure to share a crazy bikeshop and the road with you. Try stopping a little less next year and slow old Gits won’t keep passing you 😉

The trackers used interested me, SIM card based and cheap on ebay..mmm 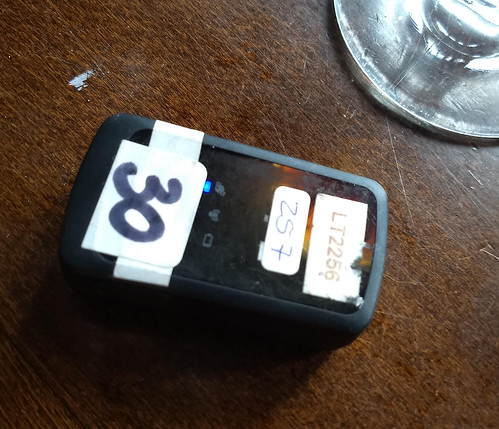 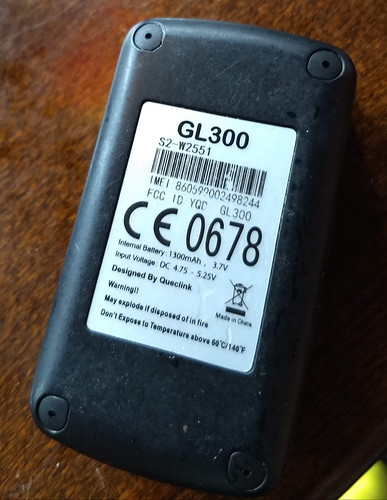 I really liked Sebs Sonder Camino a good entry level bike for endurance fun, capable of taking on any surface at a good price. 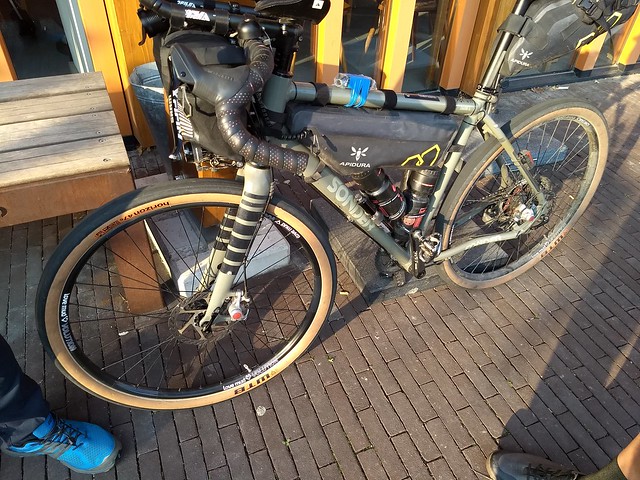 If you enter this in 2020 cover all bases, so many underestimated how different it is to race this early in the year and pulled out. Show it some respect and don’t use booking an early trip home as an excuse to not finish.

True to form my brain forgot I had little sleep for the last 48hrs, the party continued welcoming riders home, and I collapsed in the hall later that evening.

Funny how people ride so far in these events then are shocked when you say you are riding home, guess its a mental thing, I enjoyed it.
Again I love this ferry, chips on the dock of the bay watching the boat, then just rock up to board anytime. On arrival Ajax were thumping Spurs 3-0, it was interesting to see the change in the bar atmosphere from Dutch to English Joy as that second half turned around. I will be back.

The full journey map and wheel, this trip now brings my Eddington number up to 153 Miles, four more rides over 154 should increase that this summer.

RATN 2020 website is here, it is a great way to see this great country