A Year in the Saddle will give you all the details, 29,603 miles in a year to beat the current recognised women’s Year mileage record, easy hey!

So 2016 begins and I’m looking for a big ride to start the Ton of Tons campaign for YCC so as I saw Steve Abraham off on his record hunt last year I thought it would be a great idea to go and cheer off Kajsa (pronounced Ky-ser) in Nottingham.

As she started at 8am it was an early start and a fun ride through Leicester joining in with some New Year stragglers, with some tricky icy sections, but I arrived at Leisure Lakes in time to have a chat over a welcome free coffee. 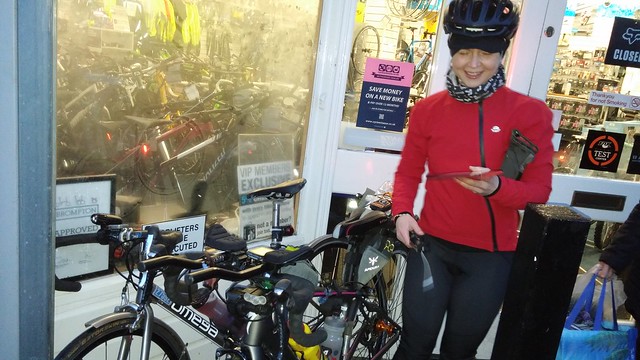 Cheered off by an impressive gathering about 15 riders set off to ride with her on a 100 mile loop of the Trent valley. A very comfortable pace and with the no drafting rule (see below), it was very sociable affair talking to the other riders, and I soon clocked up the first century of 2016 at 10am. Riders dropped off at various points but 5 of us arrived at the mid point food stop, to once again a very healthy crowd.

Superb organisation with lots of varied hot food and lovely coffee in a village hall, quite a start. During a long conversation with Kajsa it was great to hear how she intends to progress through the year. It’s being taken as a journey, trying to enjoy rather than endure, encouraging riders to join her and encouraging a sweat pledge. Another of the rules involves getting witness proof, much as the original record breakers in the 30’s did. I was happy to be the first 50 mile signatory.

It was interesting to hear of the requirements of Guinness and why they were chosen over HAMR as officiators. I was concerned that she could fall foul of them, they don’t have a good track record for cycling records, and suggested that regular checks are done, better late than never. Several weeks in though it’s clear she has a very public presence with reams of proof and I’m sure that will be fine.

Like Steve Abraham before her, it’s very much a safe and steady approach. Some eyebrows might be raised at the level of luggage on board for a 100 mile loop. It’s not a race and Kajsa is spending long days without support, covering all angles on clothing and spares to ensure completion each day. Leisure lakes are giving valuable support and speaking to the mechanic mid ride they are keen to keep an accurate service record throughout the year as an exercise in how the various components perform. Hope have donated some wheels and were keen to hear of bearing wear for example.

People seem to love the data on offer from these rides as they appear openly on Strava and this spreadsheet shows progress and compares it to Billies rides. Kajsa is also in the Century Challenge Her intention is to put up a daily route to allow riders to join in, this has already seen the route drop down into Cambridgeshire and the Fens. Check the website or perhaps offer to host her and a ride in future. I will certainly be looking into getting her into Northants and promoting it locally as a Girl-illa Ladies ride out, good luck Kajsa.

Parting company after the stop I then faced a joyous steady headwind on an auto pilot route home South of Leicester. Despite a huge soaking for the last 3 hours it was a great way to start the year, a double ton in the bank just to fire up some YCC competition.

Guinness Year Cycling Record
Interestingly unlike the current resurgence in the men’s record this is being done under the governance of The Guinness World Records group. The rules (that we know about) are strikingly different.

Those are apart from that now established proof that the rides are Satellite tracked and uploaded to Strava, but with the difference that there’s no stipulation that heart rate or power data prove it’s human powered.

Sadly I’ve just learned that Steve Abraham has retired from his second attempt to beat the (now new) record for the Year challenge. Video explanation here. Congratulations to Kurt Searvogal the HAMR  holder with a staggering 76076 miles.