Hunt make great value wheels and receive great reviews, so when they announced a 12mm dynamo set I was quick to click “buy”. The two SP dynamo QR hubs I have are a constant worry as they have a limited bearing life before total failure; the 15mm axle units have a worse reliability reputation. The SON-delux-12 unit chosen by Hunt comes with a six year warranty; so now I can get the exact wheels I want to go fully 12mm axle on the Tripster.

From the neat packaging and impressive collection of extras you would normally expect to pay extra for, first impressions are good. Rims come pre-taped for tubeless with Skewers, spare spokes, disc adaptors, quality tubeless valves, and a spoke key with removable nipple driver. Also for the front dynamo hub a QR adaptor spindle was included. I did order this as a 12mm wheel set and had expected a rear 12mm axle fitting, this had to be purchased separately and was easy to fit. 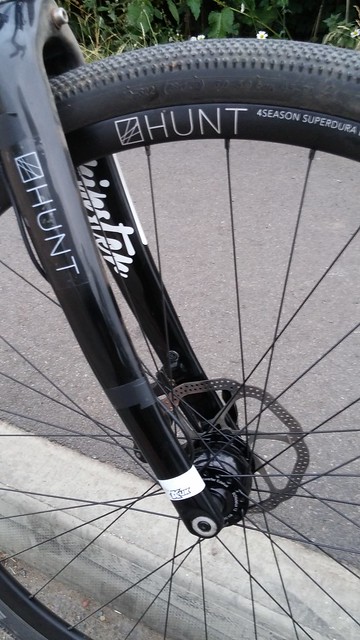 Several things came together to make this wheel set attractive:

The 12mm Son Dynamo hub renowned as the most reliable, and also rebuildable.

32 spokes with wide 4 season rims that are tubeless ready designed with brass spokes to cope with winter corrosion and re-tension.

The Schwalbe 40mm G1 tyres shown here measure up at exactly 40mm in use on a wide rim.

The SON dynamo does actually appear to fire up the USE Revo light quicker than the SP wheel did.

Note: With the new style Shimano spline to 6 bolt adaptors the larger securing bolt (now driven by a BB tool) proved to be to large to fit the Tripster fork. Finding the older type which is smaller in diameter and secures with a splined freewheel tool cured this, so check your clearance.

It would be great to fit some splined discs eventually but the Shimano ones at present foul the brake pads removal pins on my Avid discs.

Those that follow this blog will know this pair of wheels are going to get a good pounding, hard fair use, no jet washing, just miles and miles of varied action. It was a shame they arrived whilst I was away on the TransAm race, as it turned out perhaps this was a blessing.

Normally I would wait some considerable time before posting a review but when your rear hub starts to make loud noises so soon it’s time for action. The drive didn’t fail but was creaking badly under load off road to start then degenerated to under the slightest load. Several loud cracks and bangs soon announced that it was only getting worse, a sure sign that the free wheel drive was struggling to engage. A good reason to delve deeper into the hub

At least the freewheel is easy to remove, undo the spindle, pull and off it comes revealing a 4 sprung pawl arrangement for the drive. There was no sign of any grease on the pawls or the drive cog, and also no sign of any dirt ingress. A small amount of corrosion showed that water had got in despite having been ridden in a minimal amount of rain. The seal shown was undamaged, and again ungreased. 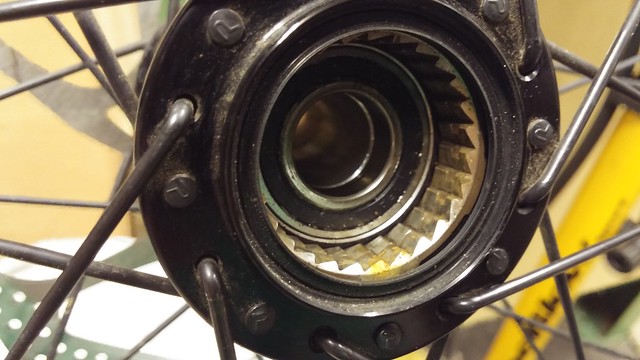 From the photo below you can see that two of the pawls are stuck in, and a third was also stuck before I touched it. The one and only positively sprung pawl was doing all the drive it seems. The bangs were the result of the stuck pawls that had only just engaged with the drive ring, then slipping past I guess, not a very good result for such little use. I am now glad these wheels were not available for the 4300 miles of the TransAm, I would have been even more displeased than I am now. 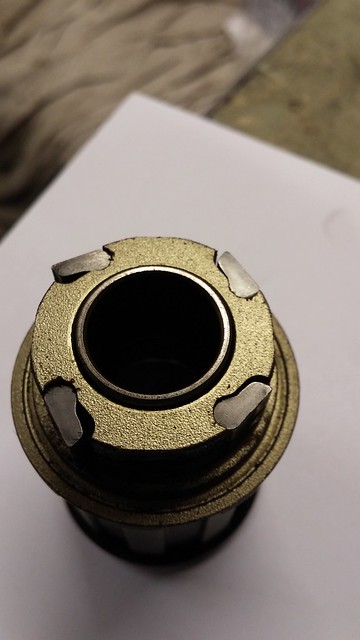 The pawls are held in by the thin spring, It is prevented from rotating and allowing a pawl to displace by a protruding grub screw. There was minimal grit behind the pawls when removed but the pawls themselves show some high spots and signs of some contamination. 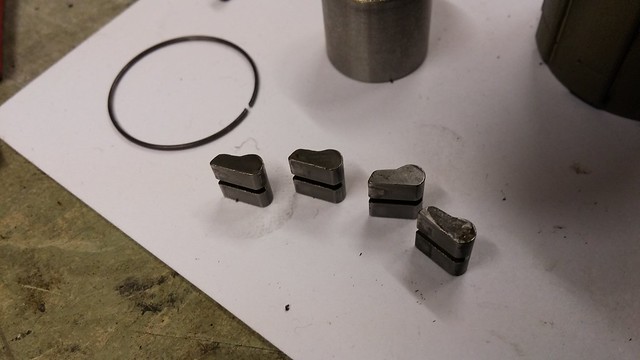 The pawl on the far right showed a particular build up that took some fine emery to remove. Two of the others had edge highspots which could impede their rotation. I dressed all of them with fine emery and reinstalled with the slightest sliver of grease as the design doesn’t seem conducive to over greasing. The drive ring was also lubricated with some DT special Teflon drive grease from their hubs, which prevents stiction.

The hub was now back to quiet full operation. Hunt assured me this was an unusual occurrence so lets put this down to a Friday assembled hub then. To their credit Hunt sent me a full pre-greased replacement hub as soon as I contacted them, great service and thanks for the free race cap too.

If there is any more developments I will update this review, but compared to some hubs there doesn’t seem to be anything in the design that would lead to a total failure on the road and it can be very easily serviced during a long trip.

Oh the Dynamo front hub, it’s German, it works with no fuss, quiet and efficient nuff said, now back to the riding.

I have had an Igaro D1 Dynamo to USB convertor fitted for some time now, and used it for the TransAm race. Connected in parallel with the light from the hub they share the power. For the TransAm the SP-PD-8 hub was used without any issues. Compared to my previous KemoUSB setup where it was lights or USB power but not both I noticed there was a slight dimming up hills and that the stand-light capability indicated less overall power going to the light. Speeding back up the light then flickers and dims as the USB takes power and takes some speed to be back to useful.

To remedy this I had to remove the 5v output lead from the Igaro to the cache battery as the Igaro is reported to take zero power when no output is demanded. The low speed lighting issue was removed, so I will need to add an on-off switch for the Igaro input lead as there are times when using both light and charge on non hilly areas are useful.

The SP hub definitely provides a better power output from the Exposure Revo light than the SON hub. Also when I switch the light off (dip for cars) while riding the Revo drops output very fast with the SON compared to the SP. This confirms the SP has a greater output, it has charged the backup stand-light capacitors more than the SON is capable off.

The Igaro manufacturers referenced this actual page and explained why the SON delux dynamo name is a misnomer: is not as special as you might think.

Many believe the SON Delux is an improved version of the SON 28, as the name appears to suggest. This is not the case and it’s unfortunate SON chose “Delux” as the model name.

The SON Delux uses the dynamo core from the old SON 16-20″ folding/brompton dynamo hub. It provides about 1/3 less power (and drag) than the SON 28. It was certified on 26/700c wheels only when used with the SON Edelux light. In Germany it is illegal to use the SON Delux with any other lighting system!

So less power from the SON, that’s a shame but a price to pay for more reliability and apparently slightly less drag.

Aug 17 2017: After 2400 miles in two months there’s been no more freehub hassle and the rims are still super true despite some serious off road rock hammer at speed, especially here. Unfortunately there was one front wheel burp which totally blew the Schwalbe G1 sealing. Got to say this has never happened with a Stans 700C rim which lock the tyre on solid. In the rims defense the G1’s are a very loose fit and all other tyres have remained locked on when deflated due to a big tyre cut, or when removing the valve mid trip to re-apply more sealant.

October 2019: On my recent lap of the Iberian Peninsular the front wheel bearings of the SON dynamo hub started to show free-play. So after 16,000 miles this hub has to go back to Germany because it is not user serviceable.

The hub has never been submerged and I NEVER clean my bike with a jet-washer or hose. This compounds my belief that through axle hub bearings are just compromised compared to QR axles, they are just too small. Both of my SP QR axle dynamo hubs have done more miles than this and are still running fine, and one of them has seen extensive dirty off road conditions. If you want monster miles, or intend to ride round the world, then go for a QR version.

December 2019:  The SON hub returns rebuilt and goes into storage for the summer now I know the bearings can’t cope with my “generous” mileages. Not many miles later and I’m cleaning my rear wheel up and notice that the rim is cracked in at least three places, one of the cracks is about 200 mm long. Again its a valid warranty claim and HUNT take the wheel back and I get a new rim on the original spokes. So you could say I’m good to go for another 16K miles then 😉

Just for clarity the no quibble service from HUNT has been fantastic and no problem has stopped me riding at the time, great value for money and service.

As I have barely ridden in Jan and Feb I guess this is really December 2020. The rear rim after 9900 miles and 12 months has developed cracks from at least 6 of the spoke eyelets. Wheels are out of warranty, so even though I could replace the rim, the spokes are now on 27K miles as well as the bearings; If a future rim only lasts another 10K miles then it’s prudent to just get another wheel unfortunately. With the removal of the Dynamo front wheel to ration it for when its most needed, that’s now on 20K miles so hopefully I can get another couple of years out of the bearings.