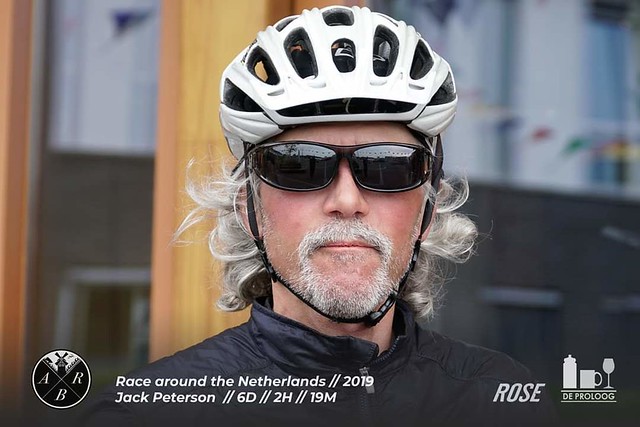 So you are thinking of entering this race, well that’s what most readers of these blogs are here for, or you did the race and would like to know if you get a mention 😉 Holland is flat right, this is a nice easy fast blast for a few days, a great event to get started with. Well a note of caution; the lack of respect for the toughness of this country and what the weather in May can throw at you led to a huge dropout rate in this event.  Be prepared and you will be rewarded with great riding on a super cycle infrastructure around beautiful coasts and waterways.  Be prepared to embrace the cycle lanes and don’t fight the system here. If riding on brick block lanes, stopping at cycle traffic lights and being courteous is outside your idea of having a race head on, then this is not for you. Don’t even think about just riding on the roads instead, the drivers here show amazing respect for cyclists and it is your duty to follow the rules (and route) to respect them too. Oh and be prepared to do many many U-turns, navigation is a challenge; not hard, it just takes so much concentration and interpretation. The rewards are some safe and very fast traverses of built up areas.

It is fun, well priced and organised and a great way to see so many differing areas of the Netherlands and very easily accessible without flying; because you are all trying to cut down on that, right.

After a year away from race events I have been lured back into this great big family of riders, I love it. This was a new dawn as a cycling hobo and the bike preparation and kit taken reflected this different approach. The only new part on the Tripster was a 32mm front Hutchinson Sector, an old WTB 30 stayed on the rear. On went mudguards, my homemade full frame bag, homemade front bag system and two waterbottles mounted on the seatbag, this all added to the Tank like heavy loaded look. And of course Taz came along too.

I had hoped to be using a new Tailfin Aeropack on the rear as I was signed up as a present from the blonde as a Kickstarter early adopter in July last year, but as so often……no ALWAYS happens with Kickstarter items they are extensively delayed.

The Revelate seat bag in its 9th year is loaded with the full Sleep gear, Mat, Sleeping bag, Bivy bag, silk liner, Z-paks shelter, PHD down pullover and a merino long sleeve top. the Yellow sack on top is the waterproofs and warm gloves and toe warmers, the forecast is not good.

The full frame bag is a Revelate upper sewed to a Wildcat framebag which was custom made for my MTB. Combined they fit perfectly to provide two separate storage areas. The Bottom section holds a small gas cooker and tea bags/coffee and is packed with daily food. The big way to keep the budget low is a daily supermarket stock up and to leave home fully loaded. Travelling light, not a chance, I left home with: 3x Tuna/mayo, Rice pud, sticky toffee pud, 4x peanut butter, 2x Meusli, 1kg Mixed nuts, 6x eat natural bars, 4x dark choc bars, Apple, banana and 4 sandwiches for the ferry trip.

Just a word about the Stena Ferry trip from Harwich, it’s my favourite way to escape this Island by bike. A nice ride down and a handy McD to meet people in and wait for boarding close by. I met Stephen and together we boarded the 11pm boat at 8.30. Dump your stuff in your own solo cabin, down to the bar for a few hours and get a good sleep started even before the boat sets off. Both Harwich and Hook of Holland are quiet ports and cycle friendly, and the boats have a good cycle tie up point.

We had a nice ride and introduction to the Dutch cycle paths and handily rode a section of the race route out of Hook to Rotterdam. Handy because we now had first hand knowledge of a new construction diversion to the route, while I clocked a few potential Bivy locations. We eventually met up with fellow TransAm veteran Ashley Sharp and spent a great night discussing America in a cool hostel bar near Utrecht. I won’t mention the snapped seat post bolt and the ironmonger repair visit on the way hey Stephen 😉 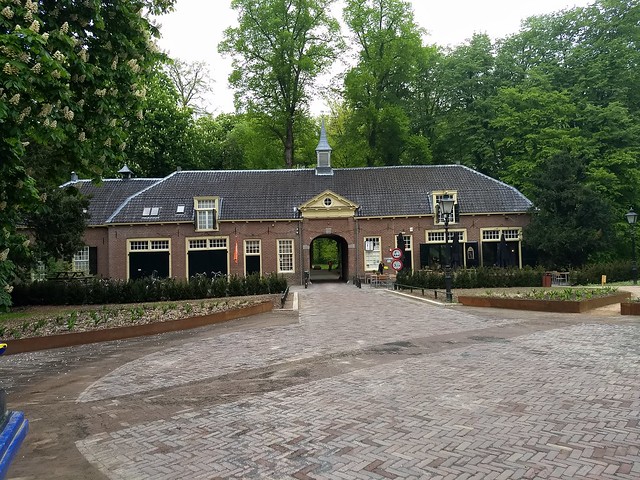 The RATN start is in Amerongen at cafe De Proloog, It’s a good casual location and is actually a huge sports/library/bar location and a nice place to chill out and catch up with friends the day before the event. They don’t do food but most riders hit the Jumbo supermarket within walking distance. Registration and bike checks are relaxed and a night in a hostel is included in the race entry. (not for 2020) Be warned though it’s worth checking out the hostel location before you arrive, it’ss deep in a forest and the direct route is off road if that worries you. Both Hostels here are closed and open for group booking only, so don’t even bother thinking about an extra night at the start, or using them at the end, it’s just not possible.

It was like a racer reunion, reuniting with riders I had last seen in the USA and with many TransAtlanticway racers I supported last year. For Hippy, Stephen and Ash, tales were flowing, the first time they had a chance to debrief after their TransAm race in 2018. 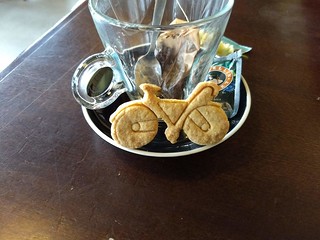 – The cafe gave us some cool freshly baked cookies, the staff there were great and embraced the event fully

We rode off to the De Ginkel hostel through the sandy wood tracks, I loved it, the other guys not so much the day before a big event. The hostel had the feel of a deserted house in the woods, no reception, just a free for all. Grab a bed, shower, cook food, it all worked, just don’t expect to find an empty electric socket for charging, they were rammed. The big dorm was actually very peaceful that night but there is plenty of room to drag a mattress too if a snoring bear appears.  Riding back to the cafe on the longer road route for a good Pasta dinner and a few evening beers gives a timing idea ready for the morning.

The fully stocked kitchen was a hive of pre-race breakfast activity for the early race start, organised chaos.

Riders line up at the cafe where an early caffeine shot is available, a huge mix of bikes and clothing choices. Some look seriously light, Big man Donncha Cuttriss looks like he’s just on a Sunday ride. Once rolling a casual start straight into a small climb, I ride with Stephen for a few minutes chatting before he heads of to his rightful place at the sharp end with Ash and the fast local boys. I’m passed by streams of riders, one of them Paul Melon before a settled group evolves.

18 miles in the level of drafting seems high, the Audax riders trying this for the first time unable to comprehend dropping back, hearing riders freewheel behind me is annoying so I stop to strip off some gear and chill. There are 134 separate riders out here and it appears that most of them are passing me as I ride the pan flat opening 50 mile section. When Wobbly passes me on his loaded steel Pashly bike I accept this is the new Cycle tramp race style 😉 Any idea of red mist and chasing back is soon expelled with a pastime you have to get used to here, the 10 minute open bridge stop.

The route heads North towards Amsterdam but then at Zeewolde follows a waterside route East and an introduction to Goose poo. The quiet cycle track route is great and the Geese with their young are leaving their mark everywhere, mudguards not so bad after all. Into some woods I’m in the presence of many of the women racers, solo, mixed pairs and a wonderfully set up young pair.

The leader has nothing on her bike, and I mean nothing, taking the full wind. Her partner is on a flat barred bike behind with two full Ortlieb panniers, the mule. An interesting concept I wonder how that panned out in the hills, oh yes there are some. The National Park de Hoge Veluwe is a cycling Oasis for families who dump their cars and all set off on rolling cycle ways through this sandy haven. Euro10 entry fee and full use of the bell required, hopefully the leaders reigned in their race heads for this section, it’s a busy place. I stop for a picnic to admire the beauty and watch a few riders roll by. 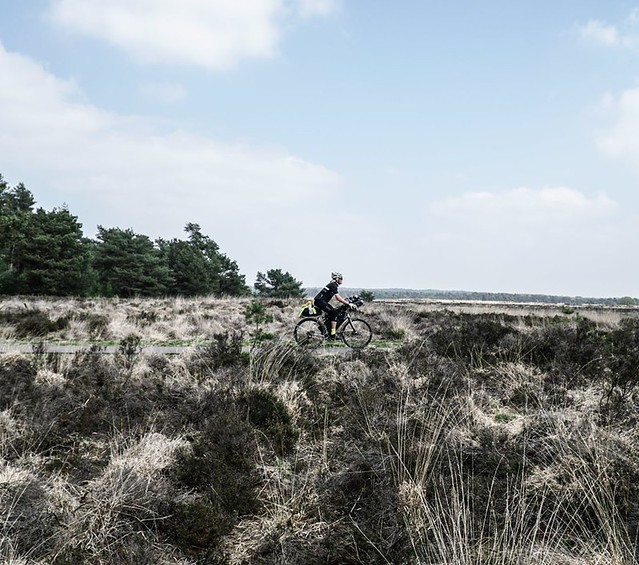 The sun came out briefly and a nice surprise climbing section at the Zijpenburg, there is even a hairpin bends fun descent. A local rider is out dotwatching and rides alongside, that’s cool and selfies are taken, the clubs here certainly know this is happening.

8 hours and 117 miles in and the lure of seeing other riders sat eating outside a Jumbo supermarket in Zelhem is too tempting. Ideal security for the bike while shopping for a big yogurt and fruit, the hard things to carry. A Scottish pair arrive and another lady passes by, so my drift backwards continues. Back on the road I eventually catch up with Sheila Woollam for a brief chat or two as I get lost and re-pass her. Navigation on this section is pretty easy, I’m just not paying attention as the evening draws in. I am carrying 3x 750ml bottles and a marked water tap pops into view at just the right time guided by a cycling statue. A full refill will take me into the night and provide for an early start tomorrow. 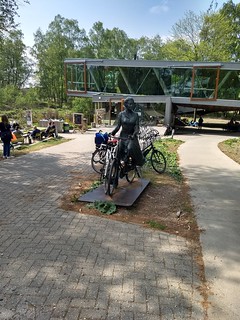 The route turns North at the German border and the dropping sun and wind see the temperatures plummet. I’m feeling OK and well rested and keen to keep going to crack the 200 mile/320Km target. The aches from my knees as the cold seeps in despite covering them with three layers and the sight of a good forest track on a summit just after Holten changes my mind. 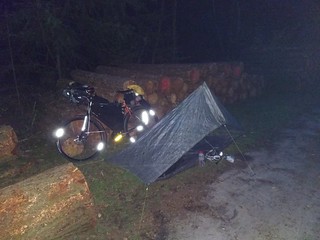 The spot was perfect, no wind and a soft sandy base. Although not really needed I set up the Z-pak tarp as it just helps me keep my shit together and stops the dew settling on stuff. Raiding the big food stash as recovery fuel I slept well.

RATN 2019 Continued The next day

4 thoughts on “Race Around The Netherlands 2019”