Ok how to do this? start with the stats, then try and honestly express how it all went. It might be a touch dull but it’s part for those who shared the ride, part memory dump for when I forget. When someone is spoon feeding me soup in years to come I want to show them I was awesome once 😉

Comments in Italics are after race observations made from replaying the Trackleaders tracking, a fun resource that stays active for a few years, worth a look at if you are planning to race.

The time on the road was so different from my preconceptions, I came here expecting to struggle to find amenities, it proved to be so different. What was I thinking this is not a third world country. As these blogs mainly get read by people entering the races I intend to pass on things I found out along the way to help you, as reading other riders blogs helped me so much.

Sleep in Astoria came easy and finally no waking up at 2am, the body clock was ready. I was remarkably relaxed, it was just another bike ride, I can do this.  The back was a nagging worry that so far only meant time off the bike was painfull, pain killers will help. Me and John had stocked up on Chicken Subway flatbreads to eat for breakfast and 5am I was swilling down the tea with the microwaved delights. We had both been here before and were ready. A short ride to the start area we joined the throng of nervous racers just in time to hear Nathan give some random start talk. 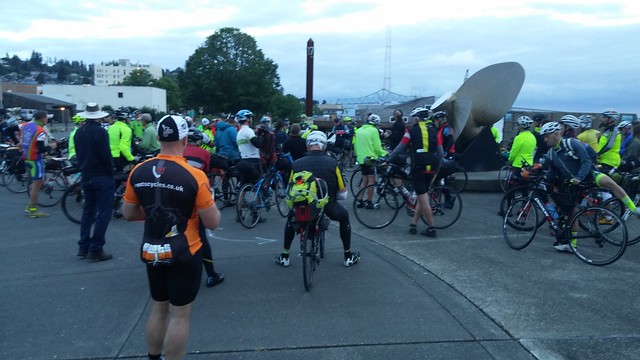 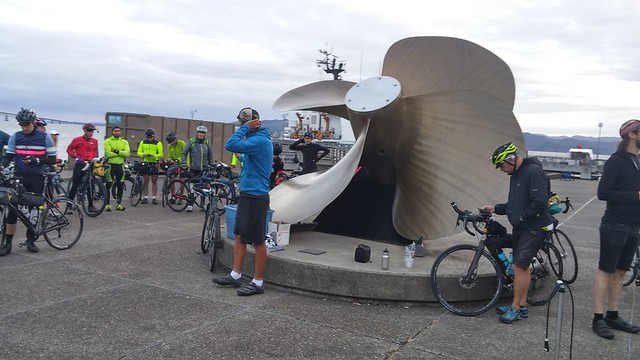 My head dropped on hearing the words, “it’s Ok to draft until the turn inland”; just wrong, wrong, wrong! and unnecessary this has no place in unsupported racing. Big man hugs with John we wished each other well, I fully expected not to see him for a few weeks at least as he starts these things better than me. Rolling out the mountain bike race instinct kicked in and I made sure of being in the front pack. Chatting with Rod and Hippy from the UK the neutral ride to the edge of town soon passed and the ego’s then kicked in. 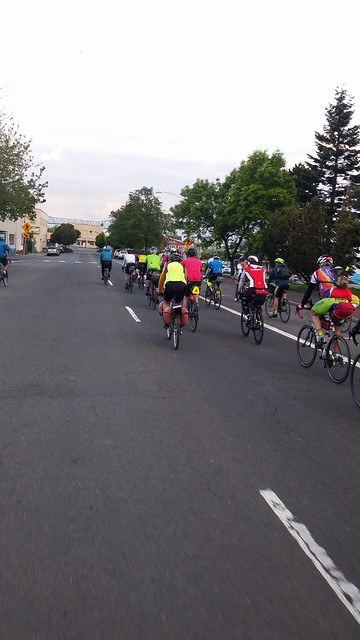 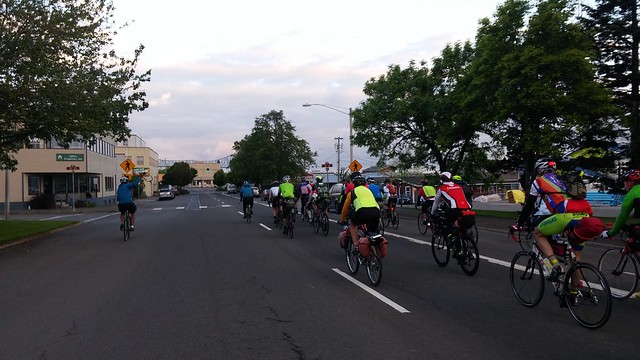 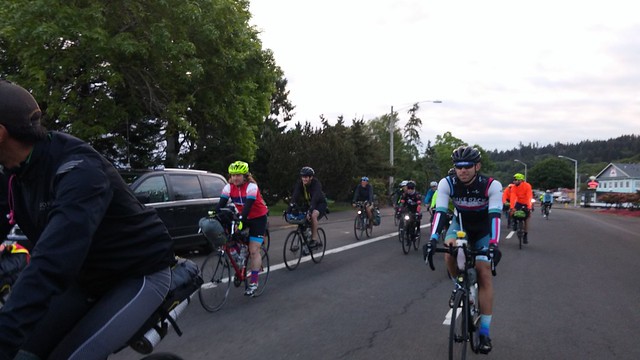 Over the river crossing’s I had the lead pack in sight, immediately you could see the experienced guys ease up over the rises, with others jumping on the pedals. In no time I was riding solo, it’s not hard and watching riders increasing speed to jump onto packs passing me to join the draft was depressing. It’s one thing being a dick saying its hard not to draft, it’s another being a bigger dick activly searching out that draft. It wasn’t long before the fixed route left the main highway and went coastal, how many riders ignored this turn to skip that slower section? A few were noted. The Oregon coastal views were superb and a real morale booster on this first stage.

Nathan was taking pictures here, anyone got a link to them? 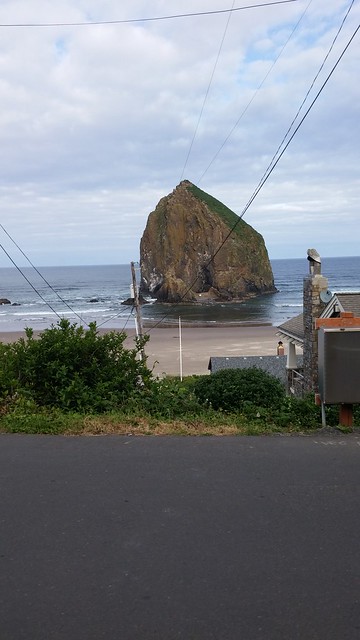 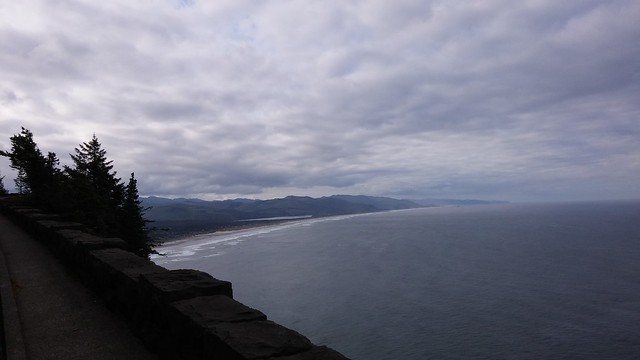 At one stage I was riding with the guy on the full TT bike, I didn’t get his name but he implied he was only riding so far on the way to another event, an Ironman? and hated the weight of his bike already.

I chatted with Jeremy who was looking smart, I’d seen from the pre-ride he was way faster than the pace he had started at, a great climber he looked good. Another drafting pack passes, Martin Cox  and Simone among it riders slower to get out of Astoria were flooding past. I like to try and remember these fast starters, hoping I’d see them again down the road someday. One of those was my man Johnny Souter himself, solo of course. We chatted for about 20 seconds and then he rode off easily, a natural TT power rider held up at the start, looking good. Things were going well, this was feeling easy and the miles rushed by, not fooling myself the tailwind was a great help.  I had tons of snacks on board and it wasn’t to hot so it was comfortable to keep cruising on, 100 miles without stopping is new territory even for me. Surprisingly I saw no one else at the side of the road, everyone else doing the same I guessed.

Pacific city brought the first stop, just across the river a garage with a deli. Time for a rest and a sit in the sun on the forecourt watching other riders pass by with a coffee and my first ever corn dog. A few ducked into the gas station grabbed food and sped on without rest, personally I say why? On day 7 the same people will be desperate for breaks happily relaxing, so why not do it now. Sitting in the same position for hours on end is a very fatiguing thing to do, sitting with a backrest enjoying some food can do wonders for just 15 mins of your time.

From here we go inland on route 18 and hit a 10 mile climb to 800ft, nothing compared to what’s coming but a chance to meet a few riders as they fall back into my clutches. I chat to Amy Lippe from Colorado who is keen to take on board any tips on her biggest challenge yet, not as green as another rider who proudly tells us this is the furthest he has ever ridden in a day, oh boy. (maybe JF)

The afternoon stretch is un eventful, I start to marvel at all the old cars left outside the houses. places here have plenty of land, and some seemed to have every vehicle they’d ever owned outside in a mini museum. Some were Cadillac fans, others tractors, a vehicle restorers dream.
(after race tracker check: In 42nd position at the stop and a further 10 riders pass while I rest. John is long gone up front.)
Around 2pm at Roselodge seems a popular stop as riders maybe realise they have pushed to hard Martin Cox certainly already looks extremely uncomfortable on the bike as I pass.  A garage at Valley Junction seems popular as I pass a brace of bikes parked up, unknown at the time John being one of those.

He surprises me by eventually catching up before Corvallis, I tell him I’m stopping for hot food before darkness and he like the idea too. The route bypasses downtown away from the main joints so we double back to find a fast food place, eat and prepare for the cooler darkness session by clothing up. 187 miles in 12 hours was great, we were both miles ahead of our expectations, no guilt in a leisurely 1 hour stop. It’s great to chat over lots of chicken and coffee, and time to post a day 1 audio update to my Whatsap followers group. They have already posted pictures found from dot watchers on the route. It’s great to see the engagement of the group tracking me back home, they are already running a sweepstake on my day 1 mileage.

We are both amazed at how fast people are going, the same old story, neither of us look at the tracker or even care.   Disappointingly I have already cut the rear tyre enough to blow some tubeless sealant, but decide to leave it a bit softer to allow the plug to firm up and just cope with a bit of extra rolling resistance.

From here it starts to slowly climb following the McKenzie River and John was soon of into the distance, the many riders who must have passed at Corvallis seem to be crammed into places in Harrisburg as I shot past, definitely the last food stop on route tonight. It was now dark and if there had been a motel here it would have been jam packed with riders that night as rest options are limited on the route from here. Checking the tracker many headed off course to the Eugene/Springfield I5 junction for motels. I stopped for a pee to find one guy bedding down in the dark behind a roadside barrier in the ferns, lucky for him he was not very stealth.

I finally dropped at Waterville after 241 miles feeling good, mainly because I did not want to climb any further to sleep. A very well lit community centre porch to bivy down on for the night looked ideal; well until another rider with one of those crisp packet bivy bags turned up and fricked about so much with no respect for another riders sleep, thanks Miles Carson! It was fricking impossible to relax with all the noise going on. Just nodding off and another rider joins the party, so much for not affecting another riders trip guys. There were two other covered porch areas around the side that could have been used, maybe us Brits are just too considerate.

Andrew Suzuki our pre-ride friend is the surprise leader way out front on McKenzie pass from Michael Wacker and Hippy. As is the norm on these events there are a mass of riders riding through the first night, checking the tracker I was 29th, very happy with that.

So how many of the top 10 fast starters will make the finish, it usually works out less than 50% for these multi-day races.